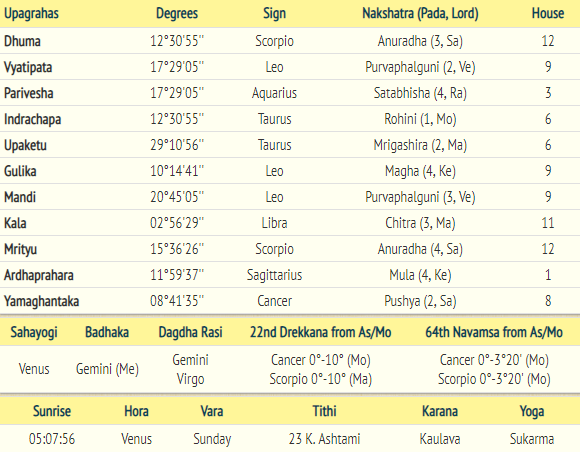 Recently, many people asked me about Upagrahas, and I decided to somewhat shift my priorities, having implemented on the website the calculation of all 11 Upagrahas. Their position completely coincides with the program Jagannatha Hora: by default, Gulika is calculated as the beginning of the part of Saturn, Mandi as the middle of the part of Saturn, and Kala, Mrityu, Ardhaprahara and Yamagantaka as the middle of the part of the corresponding planet. It is just so many authoritative sources recommend that Upagrahas be counted, but I also calculated them in the Settings, since there are different opinions on this matter.

Now the General tab displays only general information about the planets, as well as Ashtakavarga, the rest of the information, along with Upagrahas, will be available in the new "Other" tab. In addition to Upagrahas, I also added the following data: "Bhava Lagna", "Indu Lagna", "Paka Lagna", "Pranapada", "Kunda" and "Dagdha Rasi". Jyotish is immense and I think these additional calculations will be useful to someone, and in the future I will certainly tell you in detail about the use of this information in analyzing the chart. In addition, now when selecting a divisional chart in the general information about the planets, the bindu is also displayed for the selected chart, as well as the sign, Shad Bala, combustion and planetary war from the Rasi chart.

The time of sunrise and sunset is now calculated to seconds, since many special Lagnas are very dependent on this data. This is especially true of Pranapada and Kunda, which are shifted by several degrees because of these seconds, because in order to work with these points, it is also important to specify the most accurate coordinates of birth, up to the maternity hospital. For example, if you were born on the outskirts of Moscow, and the coordinates are set to the center of the city, the displacement of Kunda will be more than 10 degrees. Refining the sunrise/sunset also changed the data by +- 1 minute in the "Muhurta" section.

Aspects were removed for Rahu, but this option was moved to "Settings", where you can mark the houses to which he gives aspects. Regarding Rahu there are many secrets, one of the books is called "The Mystery of Rahu in Horoscope, which was written under the guidance of K.N. Rao. My astrology teacher, who gives knowledge within the framework of the K.N. Rao tradition, teaches that Rahu does not give aspects, Ernst Wilhelm, whose opinion I respect very much, also speaks about this. In his book "Vault of the Heavens" he writes:

"There are different views regarding the aspects of Rahu and Ketu. Some do not consider them to have any aspect at all. Those who do consider Rahu and Ketu to have aspects, generally consider them to aspect the 5th (120 degrees), 7th (180 degrees) and 9th (240 degrees) with full strength, similar to Jupiter's aspect. However, none of the astrological treatises ascribed to any of the rishis gives aspects to Rahu and Ketu. I believe that due to a factor called Argala, which exerts a type of influence on a planet, Rahu and Ketu have mistakenly been thought to aspect the 5th and 9th places from them.

My belief is that Rahu and Ketu do exert an influence onto the 5th and 9th places from them, but through Argala, not through aspect. An aspect influences a planet directly due to the aspecting planets nature, it colors what it aspects accordingly, Rahu and Ketu influencing the 5th and 9th do not do this. I have found that trying to use planetary aspects for Rahu and Ketu will be misleading and a source of confusion when making predictions."

Ernst Wilhelm in his book "Vault of the Heavens" notes the following:

"There is a lot of controversy regarding Rahu’s and Ketu’s own, exaltation, debilitation, and moolatrikona rasis. The best guidelines are as given in Laghu Parashari, sloka 13: "Rahu and Ketu, despite their dignity, give good or bad results according to their position or association." And as stated in Satya Jatakam: "Rahu and Ketu give the results of the planets conjoined with them or aspecting them. Their results depend upon the lord of the Rasi and Navamsa in which they are placed."

Relying on the dignity of Rahu and Ketu is a risky prospect. They do not seem to give consistent results due to their dignities, as do the other planets. The best rule is to follow the rules given above from Laghu Parashari and Satya Jatakam. These rules are particularly important when interpreting the dasas of Rahu and Ketu. During their dasas, Rahu and Ketu give the results of the lord of the Rasi and Navamsa they are placed in."

This is also indicated by my teacher that the position and power of the sign lord, in which Rahu and Ketu, that is their dispositors, are of primary importance. Therefore, do not attach excessive importance to the signs in which Rahu and Ketu are placed, and do not be alarmed that they now have as many as 3 signs of debilitation.

Also from time to time minor updates are uploaded to the site, which I do not always report. For example, when adding a new chart in the "Charts" section, next to the "Accept" button, you can tick the chart so that the chart is immediately built on the analysis page of the chart, and this choice is remembered for the future. And in order not to turn the chart in the head, "Arudha Lagna" (AL) appeared in the list of divisional charts.

P.S. Despite the fact that the functionality is more and more, plans to improve the project does not become less, they are only growing!